Replacing a Disk in a VNX is quite a simple task if the correct procedure is followed (Discover the failed drive BED naviseccli -h SP_IP faults -list). In this post […]

This is one that caught us by surprise! As per previous blog Post “EMC RecoverPoint Architecture and Basic Concepts” this is the port configuration as per the initial release of […]

Today I had a VNX Data Mover (Blade) slic issue where the failover relationships were not as they should be. The following commands are very useful for checking the relationships […]

When building a Vblock720 I use the following information to assist in Zoning and Masking of UCS Blades. In order to gather the wwn’s of all the VMAX front-end director […] 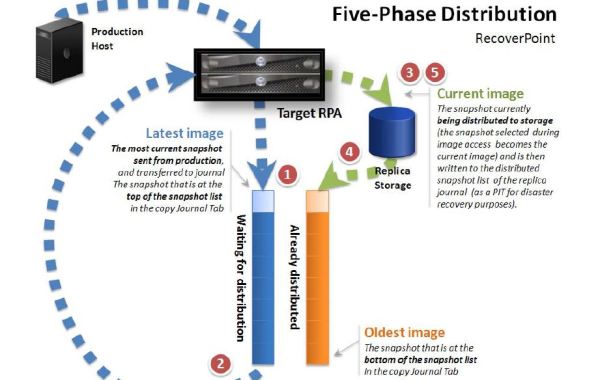 In this post I will detail some considerations for RecoverPoint Journal and Replica Volumes from a Performance Perspective. This will give you some insight into the workings and designs that […]

This post is a result of having to migrate Cisco UCS Blade boot LUNs between Raid Groups. Both the source and destination were Classic LUNs – RAID Group LUN (FLARE […]

A very important consideration is the capacity sizing of your RecoverPoint journals which is done on a per Consistency Group basis. This will dicatate the level of failback allowed (Protection Window) on a per CG configuration. The JV must have the correct performance characteristics in order to handle the total write performance of the LUN(s) being protected (next blog). They […]

This is my first blog on RecoverPoint; in this initial post I will detail some of the basic concepts and terminology around RecoverPoint and the GEN 5 hardware appliance specification. […]

This is the first in a series of blog posts on configuring VNXe using the command line. All the configurations here will be performed using “uemcli” which can be downloaded here . If you prefer to use the GUI interface then Henri has a very good series of blog posts here. The following scripts defined here are very useful if […]

This script is a result of having to create quite a large number of dedicated Masking views for VMware ESX 5.x server boot volumes and Masking Views for shared vmfs datastore clusters. In this example I will create two dedicated ESX server MV’s and one Cluster Masking View consisting of the two ESX Hosts sharing a VMFS datastore. Each VMware […]

Here I will detail the steps involved in upgrading the OE for file and block on the VNX. Using the Unisphere Service Manager is the recommended method of upgrade. The […]