Guest post by the VMAX Guru – Paul Martin @rawstorage VMAX3 CLI Cheat Sheet Disclaimer, this is not a comprehensive how to, just a toe in the ocean of VMAX3, […]

Disclaimer, this is not a comprehensive how to, just a toe in the ocean of VMAX3, there is always more and there is always why. The information here is not a substitute for the product guides which have been consolidated into a single downloadable PDF documentation set please download and refer to the documentation set for full feature descriptions.

One of the major changes with V3 is the way we provision storage. FAST has been enhanced to work on a more granular level (128KB track level) and we have abstracted a lot of the internals so that the end user need not be so concerned about the mechanics of the array they can simply provision capacity and set a performance expectation which the array will work to achieve.
In VMAX3 FAST is always on and the majority of the configuration is pre-configured, available SLO are dictated by the disks available in the array and Storage Resource Pools are defined in the bin file.
Provisioning storage on a VMAX3 is easier that on previous Symm/VMAX arrays, we are no longer required to create meta devices to support larger devices and the SLO model makes provisioning intuitive and easy. From the command line it’s pretty much a three step process:

1. Create your storage group and assign your SLO and workload (optional), if no SLO or workload is specified FAST will still manage everything but your SLO will be optimized. The storage can represent your applications devices as a whole and can be used in SRDF and Timefinder meaning if you design storage with application==storagegroup snapshot/srdf design becomes simpler later on too. VMAX3 supports 64K storage groups so there is no reason not to configure 1 per app.
symsg –sid 007 create myapp_sg –slo gold –workload oltp
2. Create and add your devices, here I am creating 5 x 2048 GB devices and adding to my storage group. Note I can just create 2048 GB devices, no meta is created. At present we can create devs up to 16TB soon to be increased further.
symconfigure -sid 007 -cmd "create dev count =5 config=tdev, emulation=fba size=2048 GB sg=myapp_sg;" preview
3. Present to the host via a masking view, no change from VMAX here.
symaccess –sid 007 create view –name myapp_mv –sg myapp_sg –pg myapp_pg –ig myapp_ig

Here I will highlight a few of the key commands to gather information about the configuration and interaction with the SRP and SLO.
NOTE:- Monitoring and Alerting of FAST SLO is built into Unisphere for VMAX. SLO compliance is reported at every level when looking at storage group components in Unisphere.

Viewing SRP Configured On The Array

Most VMAX3 arrays will only have a single SRP however it is possible to have multiple, if you are using FAST.X or ProtectPoint you may have an additional SRP in the config, the following command shows you what is available:
symcfg list –srp

Note the default SRP is set to be usable by RDFA DSE, this is normal. There is no need to configure a separate pool for DSE in VMAX3, we can reserve and cap some space from the default SRP for this purpose. 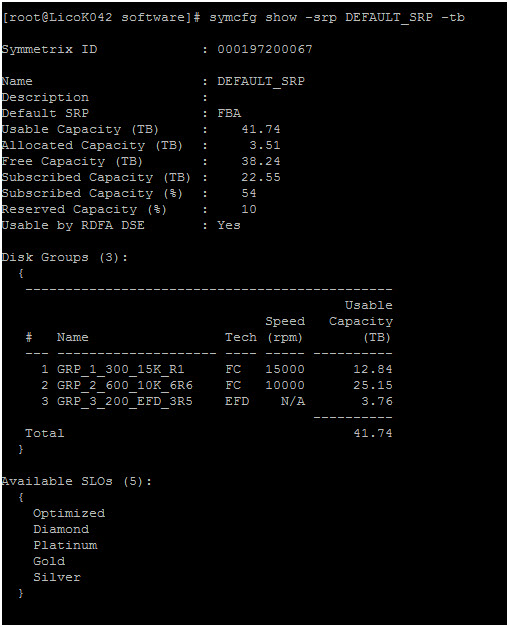 To get a more detailed look at the SLO’s and the workloads that can be associated with storage groups you can run the following command. The output shows the approximate response time for each. 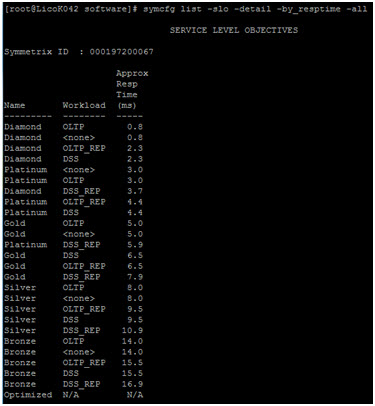 In order to get an idea of how your storage is being consumed from the command line you can run the CMD:
symsg list –srp –demand –type slo
this will show you how your SRP is being consumed by each of the SLO, it will also list how much is consumed by DSE and Snapshot, remember this capacity all comes from your SRP so it’s worth keeping an eye on.

The previous command gives us a good idea at a high level, but if we want to see from a storage group level which storage groups are associated with each SLO we have a command for that too:
Symsg list –by_SLO –detail
this shows each storage group and whether or not it is associated with an SLO, we also get some detail about the number of devices but we don’t see much regarding the capacity.

Additionally you can see consumption on an individual device level on the application storage group.

You can see the full breakdown of your SRP including drive pools and which SLO you have available as well as TDAT information. The output below shows all the thin devices (TDEVS) bound to the SRP and how much space they are each consuming.

SnapVX – Space efficient Targetless Snapshots
I’m not going to go into the full details of SnapVX and what makes it revolutionary in the VMAX3, we have a very good technote that already covers this in detail. Needless to say, taking snapshots on VMAX3 is quicker, more efficient and easier than it has been on any previous generations. See the technote for full details.
Like most features in the VMAX to access the functionality simply put the word sym in front of the feature name. SnapVX is controlled with the symsnapvx command set. Really the only command you should need is symsnapvx –h, this will get you the full set of options. I’ll highlight a few of the main commands here.

SnapVX is simplest when your storage has been designed with an application per storage group, you can still use device groups or files if you want but VMAX3 supports 64K storage groups, that is enough for one per application in most environments and means only managing a single entity for each application for provisioning as well as local replication and remote replication. You can snap multiple applications together using a cascaded storage group containing all of the child storage groups for each application. SnapVX snapshots are consistent by design so no need to specify any additional flags to obtain a point in time image of a live system.
To create a snapshot simply grab the storagegroup name which contains all the devices for your application and execute the establish command, the example below will create a snapshot hourly snapshot and will automatically terminate the same snapshot 24 hours after it was created:
symsnapvx –sg test–snapshotname hourlysnapshot establish –ttl –delta 1 –nop
You could run the command above in a cron job or batch file every hour and snapvx will create a new generation each time (gen 0).

In order to see which storage groups are consuming the most space we can run the following cmd:
symcfg list –srp –demand –type sg
The output lists the storage groups showing their subscribed capacity (how much potential space they can consume) as well as their actual allocated capacity. A Particulary useful output here is the SnapShot Allocated (GB) Column, if you are in a bind for space you can quickly identify which storage group has consumed the most snapshot space and terminate some snapshots to return space to the SRP.

Note your storage group will only show up in this command output if it is FAST managed. Although everything in VMAX3 is under fast control it is possible to create storage groups that are not FAST managed for various use cases. A storage group is FAST managed if you explicitly specify the SRP and or assign an SLO. Shown below SourceSG1 has a large capacity of snapshot allocated storage. 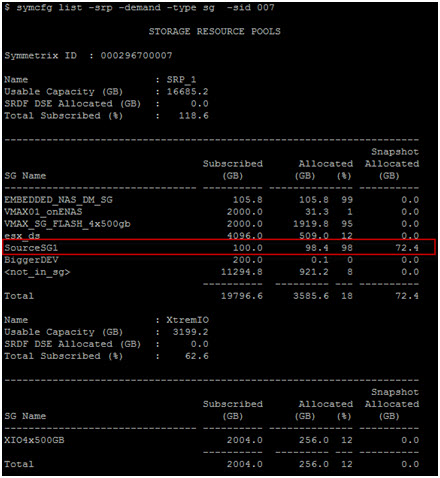 To find out more about your snaps you can run the following cmd:
symsnapvx –sid –sg groupname list –detail

If I want to link off and access a snap I can use a storage group which I have pre-created with the same number of devices as the source/target devices can be same size or larger..

For deeper dive and more on the internals please see the Technote on EMC.com
https://www.emc.com/collateral/technical-documentation/h13697-emc-vmax3-local-replication.pdf

Useful Commands For Everyday Use!:

This information is at your finger tips with symcli -v

Site Title
Head In The Clouds

Did You Bounce IT?
https://cliffcahill.com

Dell PowerFlex and PowerMax with VMware